You work in an office filled with distractions.

Every 30 seconds someone comes and throws something random onto your desk.

Your phone rings every other minute, people are tapping you on the back, and there is always someone walking around showing you a video of something funny.

You’d never get anything done, would you?

But if you work on the Internet, this is your entire life.

There are hundreds, if not thousands, of distractions to contend with every minute. Never mind all the other tasks you put on yourself.

And, if you’re honest…it’s hard to say no.

But in this article you’re going to learn how to make it easier. These are simple productivity tips to make sure you stay focused and you get more done in less time, with fewer distractions.

You’ve probably heard about these Site Blockers– and even thought about using one – but they’re one of those often talked about tools that’s rarely used.

But they’re incredible for boosting your productivity.

Quite simply, they take willpower out of the equation. Which, as observed by George Mason University in a study on productivity in the workplace:

So the more willpower you have left over, the more energy you have to want to work on those important tasks that need doing (instead of researching Joe Pesci trivia…nope, just me?).
By blocking sites you spend far too much time on, or that constantly give you notifications – like Facebook and Twitter – your focus isn’t broken and you can work at a higher quality for longer.

Personally I like to use RescueTime, because it not only blocks how much time you spend on your computer (which can be a wake up call in itself), but because it logs your most distracting sites and let’s you block them.

But if you don’t want to spend money on an App, you can also use the Chrome extension Stay Focused: 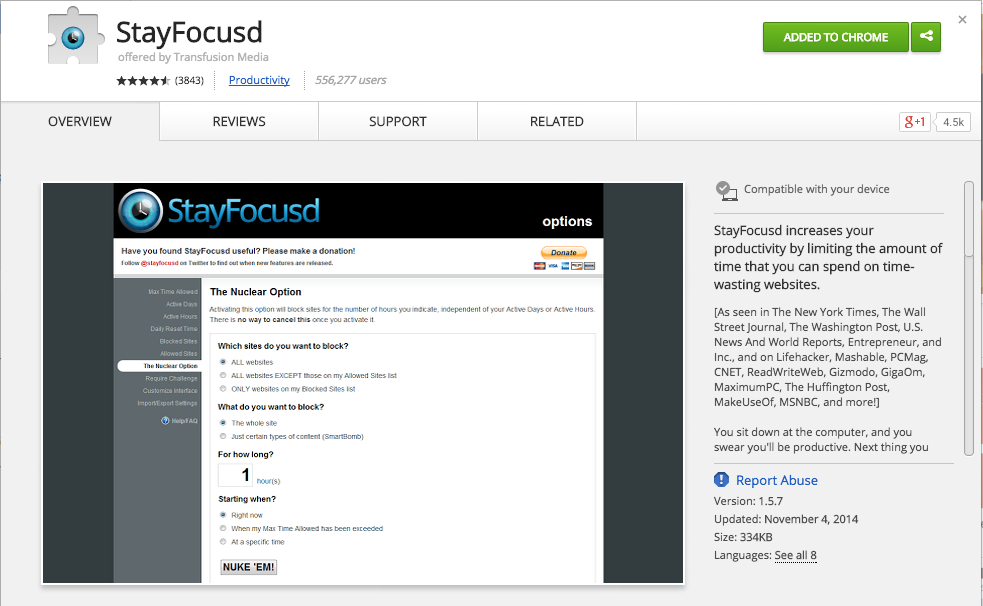 Which allows you to pick and choose the sites you want to block, or take their full nuclear option which blocks you out of the Internet for a defined time.

And, both of these apps can be used on your phone, too. Which prevents you from having a sneaky procrastination session on there.

James Clear wrote a stellar article for Buffer on the science of saying no.

In it, he identifies that your self talk – the words you say in your own head – can have a big impact on your actions, especially when it comes to productivity.

What he basically says is that there are better ways to say no than you’re doing it right now.

Researchers from the Journal of Consumer Research took three groups of people to a health and wellness seminar and asked them to set a goal. Then over the next 10 days, if they were tempted to cheat or go against their goal, they were told to decline in three different ways:

And the results are staggering:

That’s an incredible result for such a small change in how you speak. But what does that mean for you and your productivity online?

When you try to avoid something, you tend to take the “I can’t!” method. For example, “I can’t use Facebook until I’ve finished work”.

But if you were to simple shift that to, “I don’t use Facebook until I’ve finished work” you’d be 8x more likely to do it.

Choose one of your biggest distractions and tell yourself that you don’t do it. That it’s not part of your daily routine and you simply don’t partake in it.

Once you get the confidence with one, you can wash, rinse and repeat with another too.

Tip #3: Map Your Daily Attention (And Use It To Your Advantage)

In The Productivity Ninja, Graham Allcott talks about three different types of attention:

And you’ve felt all of these at some point throughout the day, but never had a label on them.

The beautiful thing about labelling them is that these attention zones are rhythmic. If your routine is consistent, you’ll find yourself dropping in and out of all of them at similar times throughout the day.

Which shows I’m laser-focused in the morning, not so much in the afternoons. So I know that as soon as I wake up, I should grab a coffee and start writing.

Then at 11am, I’ll hit the gym, watch a film, or do something that requires less focus. And at the periods of just activity, I’ll answer emails or my social media accounts.

But what does this mean for being less distracted?

Well by understanding when you’re productive and when you’re not, you can begin to structure your day around it. So you’re free to be distracted when you feel inactive, but you know you’re going to have to be focused when you’re proactive.

So get a blank sheet of paper and write down how you feel hour by hour (or in 30 minute intervals) and keep track of them. Don’t worry if you feel sporadic and all over the show – it’s your body, you can’t change it

Then plan your day, and your Internet usage, around it.

Sometimes you have to face a truth:

You’re so overwhelmed with decisions about what you could be doing, that it takes you far too long to get around to doing, well…anything.

Take a quick look at your to-do list for today (or write it down if you haven’t already).

And there is no doubt that all of it is important. But, just thinking about (or looking at) your list doesn’t get the job done.

So, you need to just start.

Once you’re in the flow – and you’ve at least turned your phone to silent – it’s much harder to get distracted. And, what’s more, you’re build momentum that can carry over into your other tasks.

It doesn’t matter if you decide through eenie-meenie-minie-mo, or order of importance; just get your head down and do it.

Terrible Eddy Grant parody headlines aside, you’ve covered four tips to not only make you more productive, but to stop you from being distracted by everything the Internet has to throw at you.

But what I want to know is, which methods are you going to adopt (or are you already using)?

Let me know in the comments…