Can I be open with you for a second?

In my personal life, I’ve been having a rough few months.

I lost my Granddad to Pneumonia. I lost my Grandmother to dementia. I’ve become haunted by an old relationship. And, I’ve had more work on my plate than I know what to do with.

But I’ve been fighting my way through it, one foot in front of the other, each day. Because that’s what you have to do, right?

And, being part of the modern generation, I’ve found social media to be a nice outlet for it. Because, well…it’s cheaper than therapy.

But instead of dark and sad posts, I’d try and share positive, feel good updates, like this:

Or this incredible video from Tom Hardy about Charles Bronson (note – there’s swearing in the video, incase that’s not your cup of tea):

Now, when I share stuff like this, I never really think about the people who read it. I just write it because it’s in my head, throw it out into the world, and see what comes back. Like a futuristic message in a bottle.

But a few days after one of these posts, I received a message that had a powerful impact on me. An old friend – let’s call him John – reached out to me with a story.

John told me about how he’d lost his grandparents weeks before. That he’d fallen out of love with his girlfriend. Scared he wasn’t going to be a good father to his son. And he had no more lust for life.

And how he’d go for long walks late at night, across bridges, and think about just ending his life.

But John told me that he’d seen what I’d been putting on Facebook and Twitter. That he’d read the words, watched the videos and listened to the quotes.

And in every one of them he found something positive that made life still worth living.

When I read this, it knocked me off my feet. Because I had no idea that the updates I’d created could change someone’s life.

Now, I’m not saying this to blow my own trumpet. But, because it taught me a lesson:

What you put out into the world through social can change the people around you.

Whether you’re crafting for a business audience. Your own personal followers. Or, everyone that falls between. What you update and share is important.

So, today, I’d like to explore how to create social media updates that matter:

It Starts With Being Authentic…

There is only one you in the whole world.

But you can only ever be you.

And that’s who your followers want to get to know.

They care about the little nuances in your life.

Not what you had for lunch or that you’re sat in Traffic on a Tuesday morning. But that you saw, or thought, or felt something worth talking about.

There are two people I respect on Social Media for this.

The first is Chris Brogan.

He’s more than happy to share his thoughts and emotions. And challenge popular belief each day on Twitter. 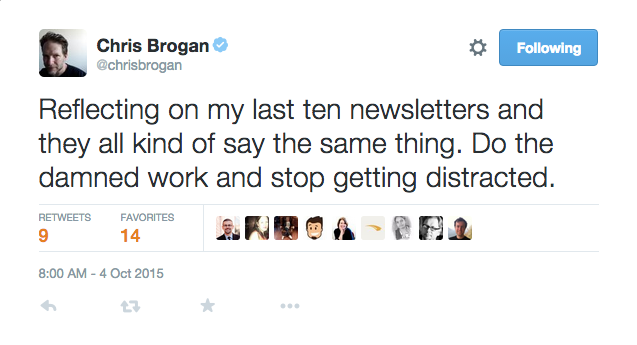 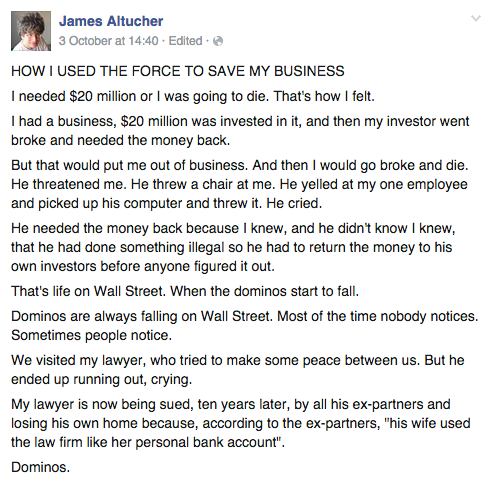 They both have connections with millions of people across the globe. They’re trusted and well respected. All because they’re happy to show their scars, and talk in their most authentic, honest voice.

Being authentic is scary.

It means you have to get naked in public and share the parts of your life you’d rather hide. You have to own up to your mistakes and admit you’re not actually a superhero.

It means explaining your company messed up from time to time. It means showing you’ve taken risks and failed.

Heck, I’m writing to you now on a blog for a social media tool. And I’m telling you about how my Granddad died, my friends suicidal thoughts and how you need to be yourself.

So, in the words of Ernest Hemingway:

Value is the foundation of Social Media.

Whether that’s in a specific niche, topic, industry or hobby. If it doesn’t add value, they aren’t interested.

But value is a funny old thing. What actually counts as value? 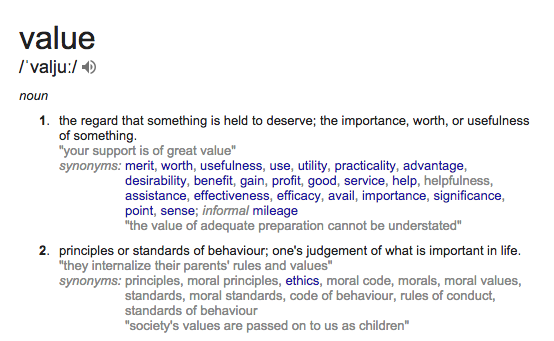 And one statement stands out to me there – One’s judgement of what’s important in life.

Because in social media that translates, quite powerfully, to:

Talking about the issues that matter.

Writing updates about the important, or hard to have, conversations. Giving your opinion on a problem that people struggle with. Or, sharing a thought that’s close to your heart.

But, what if you struggle to believe that your input has value?

Well, let me give you the most important piece of advice I was ever given as a writer:

It has value because you said it.

You wrote it. It matters to you. You think it’s important. And, chances are, so does someone else out there too.

And It Ends With Generosity.

Because art isn’t about painting or writing or design. It’s about the human ability – and desire – to connect.

And to connect you have to give, generously, a part of yourself.

That doesn’t mean to write updates that matter you need to start giving away your product.

But what it does mean is that you should give your knowledge, your advice and your stories. Even when it doesn’t seem like anybody is asking for it.

Because in the background of your social media channels, lurking, silently, is the person who needs to hear it.

They don’t raise their hand. They don’t ask for it. And, they probably wont even tell you that they got it. But this isn’t about likes and Retweets and favourites.

Once you give generously, you open the door to all the social interactions and viral statistics you can think of. But not a moment before.

So give yourself to your audience.

They’re counting on you.