Anthony Trollope was one of the world’s most creative writers.

In the 1800’s he regularly released novels over 700 pages in length, multiple times a year, and wrote whole series so long in length that Lord of the Rings looks like a short story.

And, he did all of this while working a full time job for the British Postal Service.

According to Stephen King in his book On Writing, he was able to stay so creative for one simple reason – his process:

If he finished a book in that time too, he’d simply write The End, set it aside, and start writing his next book.

Now you’re probably thinking, “Wow, that’s insane! How can you be that creative, that often?” And, you wouldn’t be the only one.

The truth is,  a creative process is all you need to be more creative. In fact, it’s the only part of creativity that you have any control over at all…

John Cleese is a comedy legend – you might remember him from Monty Python, Fawlty Towers and A Fish Called Wanda – but he’s also a keen psychologist. And, not too long ago, he did a lot of research into the realm of creativity.

And in this research he came to the conclusion that:

“Creativity is not a talent, but a way of operating”

That is to say that you creativity isn’t a feature only a few people have. It’s something you can unlock.

For example, in comparisons between people who are deemed intelligent, such as Engineers and Writers, and those who aren’t, there was no difference in I.Q that suggests the smarter you are, the more creative you are.

As long as you have a base level of intelligence, you can be as creative as anybody else on the planet.

Which is great news.

But how do you unlock this creative potential hidden deep inside of you?

Well, Cleese points out there are 5 ways you can become more creative if you arrange them correctly.

Now, there are no guarantees that any of these will give you your big idea instantly. As is the case with anything creative, there are good days, and there are bad days.

You could sit around for hours and get nothing, or you could sit down, sip your coffee and be hit with a freight train of original ideas.

As the man himself says:

“This is the extraordinary thing about creativity: If just you keep your mind resting against the subject in a friendly but persistent way, sooner or later you will get a reward from your unconscious.”

But what all of these steps will do, more importantly, is get you into an open mind. Which is the breeding ground for all creativity. 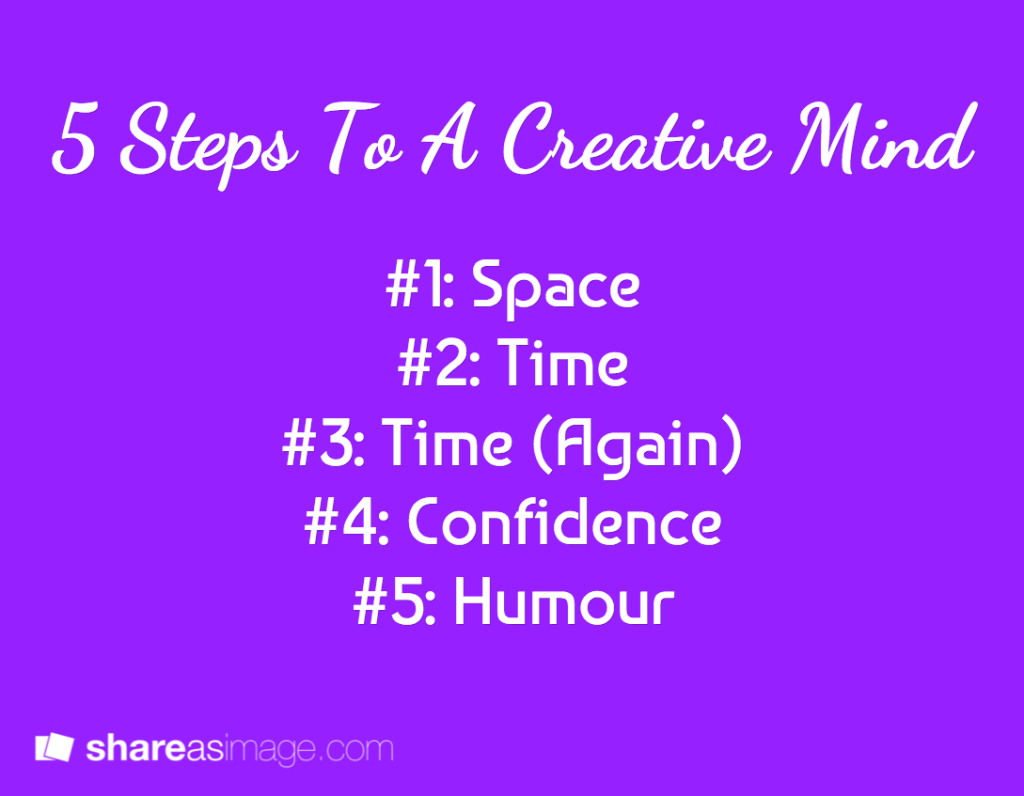 There are two types of thinking when it comes to your work:

The closed mind is where you spend most of your day. It’s where you complete tasks, think logically and get work done. This is your productive state of mind.

The open mind is where you need to get to if you want to be creative. It’s where you can be playful, curious and free from pressure. It’s the state of mind that lets you connect the dots, find clues and create solutions.

These five steps you’re about to learn about will help you get into that open mind more easily.

Pressure is a creativity killer.

In that, if you’re under the usual stresses and strains of day to life – your boss peering over your shoulder, super tight deadlines etc. – you’re not in the right mind set to be creative.

Because, understandably, your focus is elsewhere.

When your focus is on being more creative then, space can be a physical space – like a desk or a park or an office – or it can be mental space, away from the pressures and strains of daily life.

This space doesn’t need to be clean, either. Some of the worlds most creative minds, from Einstein to Twain and Zuckerberg all boasted messy creative spaces.

All it needs to be is removed from your usual workspace, where you’d normally find yourself in a closed mind.

When I’m thinking of blog post ideas, or I’m stuck at a particular point, I like to go to places I’d feel comfortable meditating or reading a book.

Try choosing a spot that makes you feel like you’re in a bubble, where you’re sealed off from the outside world – and the stresses and strains that come with it – and you have your own ‘me’ time where you’re in charge and free from distractions or interruptions.

Have you ever heard of Parkinson’s Law?

Which means a 10-minute task can take four hours; if that’s the time you give yourself to do it in.

As Cleese himself says, “It’s not enough to create space; you have to create your space for a specific period of time.”

Because if you were to just sit and ponder, for an unlimited amount of time, the urgency to solve the problem – or reconnect the dots – is lost.

This is why deadlines are important.

Take a look at some of the more high-pressure creative industries, like Advertising. If you’ve ever watched Mad Men, you’ll have seen just how much pressure these guys are under.

George Lois, one of America’s greatest visual advertisers, famously stopped saying ‘No’ and started saying ‘Now!’ to projects with tight deadlines, because he could laser focus his creative in a short space of time.

And he created some incredible campaigns under those deadlines, like this one: 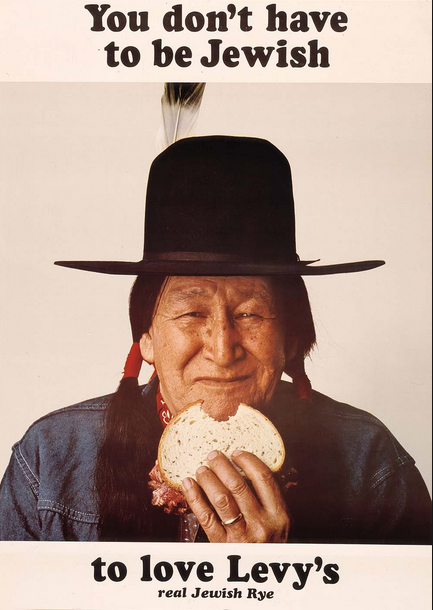 So when it comes to sitting in your new space, give yourself a defined amount of time to be there.

You need to know that your time in your space will definitely end at a specific time or after a certain amount of time.

It could be that you define yourself one hour every day, or that between 7:30am and 9:00am is your creative time. Either way, it’s important to know that when your reach this time limit, normal life will resume.

If you’ve ever tried to meditate, or spend some quiet time alone, you’ll know exactly what I’m about to say:

As soon as you sit in your quiet space, and begin to think, your mind starts to wander to your normal every day problems.

Phone calls you need to make, the emails you’ve not sent, that tweet you’ve not written and the fact you’ve not decided what you’re going to have for lunch yet.

Because, it’s easy to think about these problems. They’re what you’re used to thinking about. They’re habitual.

What’s important in this step then, is that you give yourself the time to think beyond this. You have to strap your mind down, work through these thoughts until your mind begins to quiet.

Now, for some of us, this can be a short process. After a year or so of mindfulness, I can quiet my mind in minutes. For you, it could take a little bit longer. The more practice you have at it, the quicker it will come.

The second part of time, is giving yourself enough time to think beyond the first solution that comes to mind.

When you’re faced with a problem, it’s easy to take the first solution that comes to mind. Because you have an answer, you’re busy, and it works.

But as research from Mackinnon has shown, thinking longer on the solution – even in the face of your first answer – can lead to more creative and original solutions. Because, if nothing else, you have another dot to try and connect.

So, unless you absolutely have to, you shouldn’t take your first solution. Take the second one. Or the third. Or the one that seems the most original and creative to you.

A good rule here is that if it seems outrageous to begin with, it’s probably original enough to work.

The opposite of creativity is fear.

Nothing will stop you conjuring up wonderful, magical, out of the box ideas as much as the fear of making a mistake.

That the image you’re making doesn’t conform. That your boss might not like it. That your readers will all shout at you about it. That your mailing list is going to burn you at the stake for what you’ve just thought.

But in this space, with the time you’ve given yourself, mistakes don’t exist.

You have to give yourself the confidence in your own abilities, and that the ideas you create, are good. No matter how out-there they seem.

Remember, to be creative is to play.

You’re always asking yourself, “What if?”:

You would never tell a child they built their Lego’s wrong. Or that the picture they painted, or the game they came up with all on their own, was stupid or bad.

So don’t do it to yourself, either.

It’s okay for things to be wrong. Your ideas to get rejected. Your colours to not match. You need to have the confidence in yourself that you’ll recognise these bad ideas – trust me, you’ll have them – and that you’ll spot the good ones too.

It’s the fastest route from the closed mode to the open mode. Because humour makes you more playful, relaxed and free from pressures than anything else.

But, as Cleese points out, you see certain situations as “too serious” for humour.

However humour doesn’t make a situation any less serious; it just leads to more creative solutions to problems.

For example, my Dad works doing Search and Rescue in helicopters. He’s seen everything from plane crashes, to war injuries and people having their ribs cracked open and their hearts massaged to keep them alive.

It is a serious job.

But when they’re flying out to a scene, they’re laughing and joking. All while they’re figuring out the solution of how to approach, what they need when they get there and how they’re going to rescue the casualty from X, Y or Z.

That isn’t in bad taste. It allows them to think more clearly, with less pressure, and see more solutions to the task at hand.

So, when you’re working on a solution – no matter how ‘serious’ – allow yourself to laugh and joke and giggle and enjoy the moment as much as possible.

Creativity: It’s All About The Process

There you have it.

If you want to be more creative you need to have a process. One that lets you slip into (and out of) the open mind quickly and effectively.

Now, while this still won’t guarantee that you’ll have a million dollar idea every time, if you allow yourself:

You’ll find that you can generate more original and wonderful ideas than ever before.